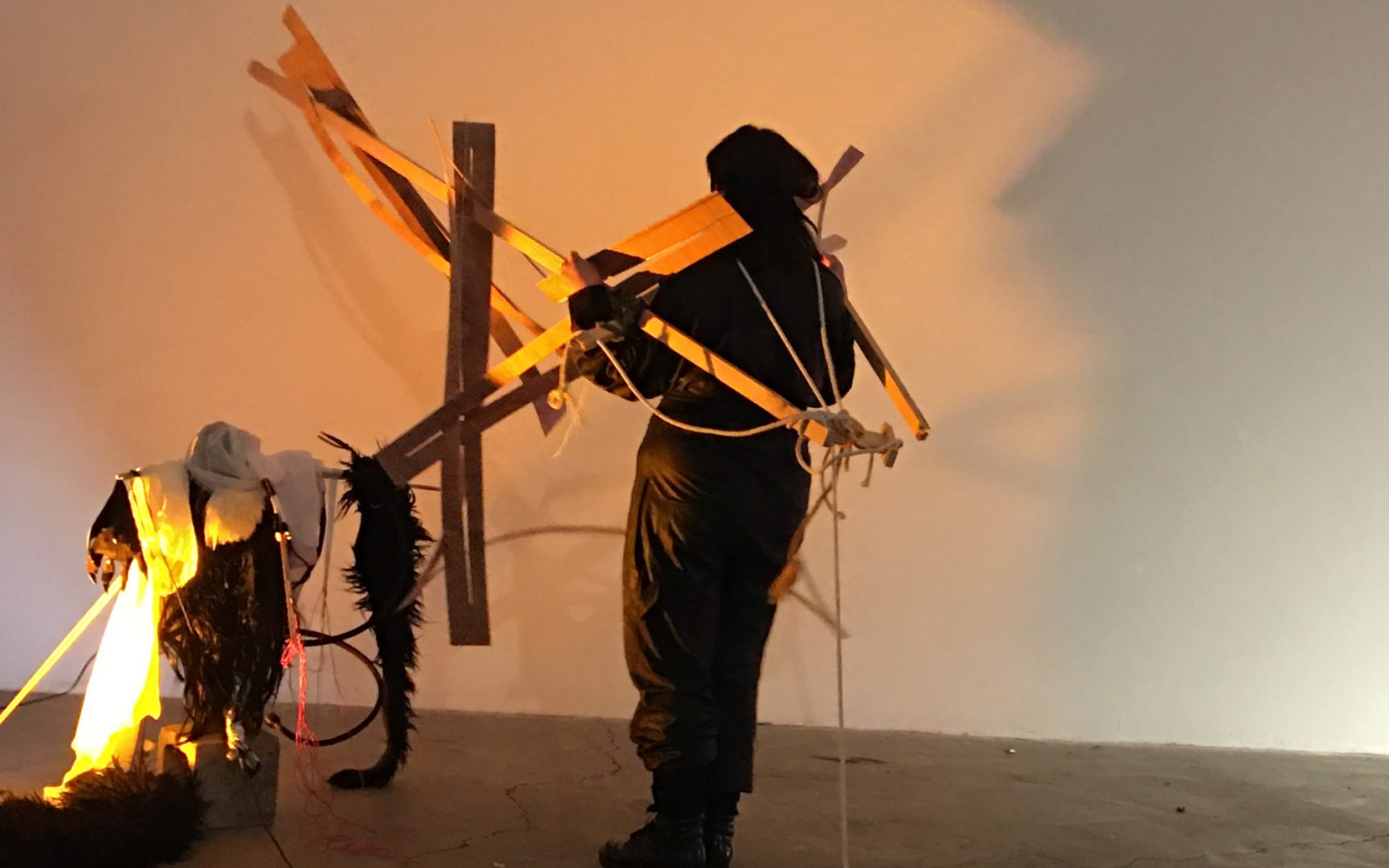 Anna Betbeze is a visual artist whose experimental work involves exploration of haptic sensation, arriving at new forms that combine elements of painting, sculpture, puppetry, performance, and pedagogy. Betbeze considers the ephemerality of lived experience alongside the supposed deathlessness of artistic creation.

Betbeze’s process of experimentation and chance encodes domestic objects such as rugs and furs with strange, intimate and elemental sensorium. Evoking a world of collapsed time, through the layering elemental processes produces haptic reliefs of sensation. Her works double as paintings and salvaged remains, referencing parallel histories of tapestry-making and maps, while evoking the psychological underpinnings of the formless and abstract object.

Pushing the boundaries of traditional visual conventions, she questions the means through which memory can be materialized, released, and renewed. Betbeze’s works evoke the historical and cultural spaces of the monument, the ruin and the garden.

Over the past couple of years, Betbeze has developed a multimodal research project, Touch Workshop.  Touch Workshop is a set of experiments to untangle the ideological orientation of the senses, arriving at inverted performances and organized around proprioceptive sensation. The project builds on the tactile research of Czech polymath Jan Svankmajer, his response to the censorship of his work in the 1970s. With Co-vid now a pervasive reality, touch is limited and vision dominates. The project has been hosted by various institutions, most recently Cal Arts and Human Resources Los Angeles.  The project is organized around these questions: How can the tactile imagination respond in the absence of tactile freedom? How do we transfer and transmit feeling, touching those outside of our time-space?

Betbeze has had solo exhibitions at Mass MOCA; Utah MOCA; The Atlanta Contemporary; Nina Johnson, Miami; Markus Lüttgen, Cologne; Lüttgenmeijer, Berlin; Luxembourg & Dayan &, London; Kate Werble Gallery, New York; and Francois Ghebaly, Los Angeles. Her work has been shown at institutions such as MOMA PS1, Musee d’Art Moderne de la Ville de Paris, The Hessel Museum at Bard College, and The Power Station, Shanghai. Her work has been reviewed in The New York Times, The New Yorker, Artforum, Modern Painters, New York Magazine, Frieze, and The Los Angeles Times. She is a 2013-2014 recipient of the Rome Prize, and the 2020 recipient of The Headlands Chiaro Award.